Why is PMMA & Some Other Fillers Bad? 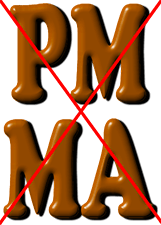 Regardless of risk, penile dysmorphic disorder has driven some men to get inadvisable penis enlargement using PMMA injected into their penis in Mexico, Brazil and other places.

Although it has supposedly been “in common medical use for half a century”, a Google search will result in no clear definition and no other medical use.

Most importantly, PMMA IS reported to be “irreversible and may have side effects including loss of sensation, inability to perform penetrative intercourse, scarring and deformation.”

Do you really need to know any more? Avoid it! PMMA is a bad idea.

It is plastic. It is a processed polymer derived from oil — petroleum. It is used to make transparent plastic like Plexiglass. Do you really want plastic in your penis?

It can be difficult and costly for a doctor to get a pure form of PMMA. It has been reported that criminal gangs in Europe have imported cheap forms of PMMA from China, diluted it to 1% of original purity and distributed it widely.

That diluted form of the cheap PMMA is nasty stuff and it is everywhere. It produces a very bad result for the patient regardless of the doctor or the part of the person's anatomy where it is used. Some reports claim it is a carcinogen.

If the price quoted to you is significantly lower, ask yourself: “How can that be?”

Dr Kim does not and will not use PMMA in any form — not Metacrill, not Linnear Safe, not Artefill.

He advises patients to choose superior alternative materials which are much safer for volumization and contouring such as MegaFill (scaffold) or Cutegel ULTRA HA. (filler).

Dr Jayson Oates of Australia reports: Use of inadvisable products for permanent penis enlargement can “lead to significant complications, infections, grotesque deformity, amputation and, in some cases, death.”

In addition to “unsightly and painful disfigurement”, other possible consequences include: “hardening and forming large disfiguring nodules that can be very difficult to correct, even with surgery.”

Those are the reasons Dr Kim uses only time-tested fillers and scaffolds DESIGNED and INTENDED for penis enlargement that consistently get satisfactory results the vast majority of the time for most patients. He wants high patient satisfaction and a safe outcome with minimal potential adverse events.

He does not use Aquamid® (polyacrylamide hydrogel, 97.5% water).

And he does not use Ellansé® (70% carboxymethyl cellulose based gel carrier and 30% polycaprolactone microspheres) for penis enlargement.

Because Korean doctors know well about its off-label use for penile girth enhancement.

That means the unapproved, unintended, off-label use for penis enlargement can create a result similar to Peyronie's Disease.

These cases are actively being collected and compiled to launch protests against Ellansé.

When manufacturers brag about the great results being achieved using fillers, you will always find the disclaimer: “Individual results may vary.”

Ellanse is not an advisable material for penile augmentations.

Dr Kim's response to patients who want to use any medically inadvisable filler for penile girth enhancement:

I don't want to make you unhappy although you promise to pay me. Please forget my name.

MegaFill™ is a registered name and/or trademark of L&C BioGyeonggi-Do, South Korea.